The rage continues unabated.  The EVE Forum thread I linked too last post is now up over 200 pages and 6,000 posts.  There are online player protests in the main trading hubs, and news that some of the most enraged EVE twitter and blog writers are being handed out in game bans for threatening behaviour.  CCP released a Dev Blog on the issue:

It reads ok to me – but then again my issues with Incarna are only in game ones.  It can all get overwhelming however, so I’ve taken the proverbial Ostrich approach and stuck my head in the sand, and gone back to my original notes to myself.

. The new Amarr Maller hull is an improvement. 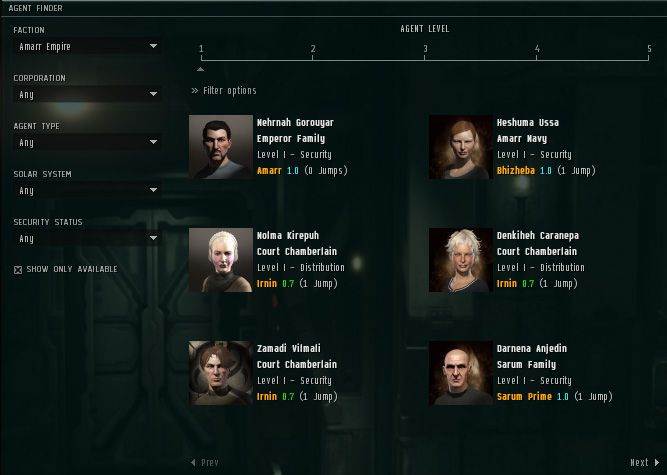 . The new Agent Finder – the response is a little slow, often requires two clicks to start it, the Agent Level hot spots are a little too small, and the Prev and Next options should only be shown if there are in fact pages to navigate to.  Also need an option to search by region.  Basic functionality however is good, and it is a useful addition to the game.

. The new Corporation Recruitment interface is much improved and actually nice.  Seem to be responsive and is another useful addition to the game.

. Planetary Interaction in Captain Quarters seems to basically just be a hot spot on screen which brings up the old interface.  Not really anything that should be considered a feature.

. Ship Fitting tools in Captain Quarters again is just two hot spots on screen which brings up the old interface.  Not really anything that should be considered a feature.

. The bit about all players must customize their characters – I did not see this prompt when I logged my toons in.  Obviously if you have previously suppressed the message this new requirement wasn’t demanded of you.

. I have docked and undocked from multiple different types of stations, and I just can’t see how it is now more visually appealing.

I’ve turned off Captain Quarters in my all clients now.  (Actually, it would be nice to have that setting be character based and not client install based.)  I’ll revisit it each time there is a patch or update to check for changes, but just at the moment any interest factor doesn’t overcome the cost of the performance hit.