Deciding on the first module for a Raitaru fit opened a Pandora’s box of questions.

Depending on the missile loaded, the Multirole Launcher has a range of between 687km to 945km.

So how close can I anchor it from other structures? Specifically, can I plant it near one of my Player Owned Custom Offices or pair up two Raitaru so that they can support each other?

The official support page on structure deployment outlines where they cannot be anchored (Trade Hubs, Career Agent Systems, New Player Starter Systems, Shattered Wormholes or Thera), but is vague about how far away from other objects they must be in space.

Are there any Structure skills that close that gap? No.

I check the module list and find a Standup Signal Amplifier. The T1 module increases the targeting range by 11%, Scan Resolution by 20%, and adds +1 to the maximum number of targets you can lock. The T2 version provides 15%, 25% and +2 respectively. They are priced reasonably too – around 3M for T1, and 40 to 80M for T2.

I could use the Signal Amp instead of the Ballistic Control System in my 1 low slot. That would reduce my DPS by 7% and increase my lock range to 392km and scan resolution to a still dismal 78. Now the question is why would I want to do that? There would have to be a specific tactical reason for needing the extra 42km of range. I would also think attackers in a High Sec structure takedowns will be within that 350km range and hanging around for a while, so possible to lock.

Needing a further understanding of the ranges I will be working under, I review the Structure Electronic Warfare modules.  They suggest I won’t need a longer lock range. 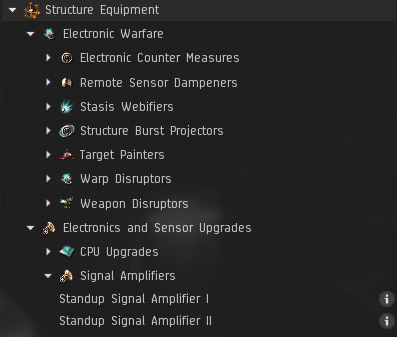 The ECM jammer can be scripted and has a 75km optimal and 75km falloff. You could use ECM to disrupt logistic ships or to take some DPS off any friendly ships supporting the Raitaru – but you would need to fit two of them to make much of a difference. That removes the option of tackle, and I think Energy Neutralizers would be a better option. I discount ECM.

The remote sensor dampener cuts the targets lock range and scan resolution by 55% and has a 75km optimal and 150km falloff. I guess you might use it to force logistics into closer range but given the Raitaru’s ranges and the type of ships likely to attack, there doesn’t seem to be a need for this module.

The Stasis Webifier has a 200km range and a 70% effectiveness. It is an amusing thought but doesn’t seem practical. Anything small enough that really requires slowing down won’t do enough DPS to be of concern – and again would be better dealt with by Neuts. No to 200km Webs.

There is an interesting group of Burst Projectors that do area effect EW but – unsurprising – I read they can not be fitted in High Sec, so I discount them.

The Target Painter increases Signature Radius by 65% and has a 75km optimal and 150km falloff. That is a possible option.

The Warp Disruptor has a 210km range and a Jam strength of 100. You can fit only one – but that is a mandatory selection. It can be scripted to also turn off Microwarpdrives and micro jump drives – but only at a range of 63km. I think the Neuts again would be a better option than scripting.

The last option is a Weapon Disruptor. It cuts range and tracking of turrets (by ~60%) and range and precision of missiles (by ~30-50%). Like the Dampener, there doesn’t seem to be a pressing need for this module.  It seems more important to hold and damage attackers than make one of them approach closer.