This weekend CCP had yet another one of those Log in for Skill Point Giveaways. It went for just 3 days, but Alpha Pilots could earn 75,000 skill points, and Omega Pilots 250,000. These giveaways have been so frequent that they have lost their allure. I think I heard there is another Undock for Skill Point event soon.

I last used all my Unallocated Skill Points on my Main Pilot Elmis back in August last year. In the 5 months since that pool has returned to 2.3M Skill Points. All those points were given to me by CCP for minimal effort on my behalf. I could have gained even more Points, but I lost interest and did not maximise the rewards for the Undock events.

Elmis gains 150,000 skill points for each Large Skill Injector he uses. It would take the ingestion of 15+ injectors to gain the equivalent Skill Points that CCP has gifted. That would have cost 12+B ISK.

My main Alt has 3.2M Unallocated Skill Points. These would have accumulated through CCP Gifts since January last year – 12 months. He gains 300,000 skill points per Large Injector. His Pool is worth 10+ injectors, a value of 8+B ISK.

My Alpha Alt Pilot has 800K Unallocated Skill Points. I did not bother logging her in every day and rarely undocked. She also purchased a number of Skill ranks using the Pool. That meant with a little more effort she could have had well over 1M Unallocated Skill Points over the last year. She gains 400,000 skill points per Large Injector. The remaining unallocated points are worth 2 injectors, or 1.6B ISK in value.

If you add the various training accelerators also gifted by CCP in the last year, you are talking about 10’s of Billions of ISK in skill point value given across my three accounts.

Reading back on my related posts over the last year, I can see from my tone that I don’t want to be complaining about getting free stuff, but these giveaways have me worried. They cheapened one of the more important aspects of EVE, skill point progression, and makes CCP seem desperate and lacking in new ideas.

I purchased some PLEX on the weekend and donated them to the PLEX FOR GOOD charity drive. This time the donations are headed towards Australia to help with the Bushfire recovery. That was the first proper direct donation I’ve made for that cause. Up until now its been coin and tip donations and buying at sausage sizzles and what not.

The bushfire related donations have been a bit of a quandary for me.

Some have been sent to the services, often made up by large numbers of volunteers, who are fighting the fires. This has been for equipment and supplies. That is admirable, but part of the reason they have equipment issues is that the Governments had cut funding over the years. Maybe more effort should have been focused on ensuring the Governments funded them appropriately in the first place and will do so moving forward. We shouldn’t have a need to crowdfund our country fire-fighting capacity in the middle of fighting bushfires.

Lots of money have gone to Wildlife related services. Also, admirable – except many of these organisations are or directly support very militant left-wing ideology, activists and politicians. I know a couple whose stated goals is for everyone to become vegan and for all animals to have the same rights as humans. One wants Farmers charged with murder if they killed a cow for example. I am being completely serious. There are plenty of on the ground wildlife sanctuaries and hospitals burnt out or struggling to cope, doing a great job, whose city-based head offices have provided very little support from the millions in donations they are receiving.

Similarly, there are well known large charitable organisations reaping in Millions in donations who point towards the fine print on their web pages about how much they keep for administrative purposes, and how they were thinking of keeping some of the funding in their bank accounts for future needs.

Next you have some victims of the fires complaining that they are not getting the money they feel they are entitled too. There were a series of people reported on in the media who lost everything saying this. They lived in bush fire prone areas but had no insurance. They were angry they would probably not get enough money to rebuild and refurnish. Maybe I am just too harsh of mind, as lots of people subsequently donated money and services directly to these people.

I try to focus on how lovely humanity can be in helping, and that most of the people being supported are deserving, but I am reminded daily in the news that there are lots of people and organisations in effect profiting from this catastrophe.

I am personally fine, as is my family. I could technically be impacted by Bushfire Ember attacks where I live, but the risk is very low. I have however lived in, gone to school around, and especially fished, hunted and holidayed in many of the areas impacted by fires.  I recognise small communities and townships in most of the emergency alerts sent out.  Plus of course there is no getting away from the at times horrendous smoke pollution. My Father, with asbestos damaged lungs and other health issues, has been confined indoors for much of the last couple months. It is a mind blogging area of bush and forest that has been burnt out, and it is still on going.

Those Value Pack’s CCP have been offering for years are about to be replaced, including that $5 for 1M Skill point thing. I wonder what the new ones will be like.  I expect more skins to be included.

CCP have offered those packs on sale once or twice a year, which can make them very good value.

Last of all on this unexpectedly long post – I replaced my gaming laptop yesterday. The MSI laptop I had was still able to run everything I needed it to comfortably, but it had a few issues.

One issue was that MSI has been very poor in providing any updated software, drivers or firmware. Basically, next to nothing was made available from a month or so after the laptop was released. I don’t know if that was just worse for my laptop, or if it is a common thing with MSI. In recent months this has meant I was not able to apply various important Window updates because of hardware incompatibility issues.

Another problem was an introduced hardware fault. Last year I was at a friend’s place for a Roleplaying night (a Shadowrun campaign). He unplugged my Laptop charger without asking and moved it to a new socket on a power board to make room for his oddly shaped tablet charger. He careless and with little attention managed to awkwardly wriggle my lead in a half connected / half not state, causing an electrical buzzing noise, a pop, and smoke to come out of my laptop. It turned out he had fried the soldered connection between the charging port and battery, meaning I have only been able to run off power since. He has been a friend for a couple decades and is a reasonable bloke – but he just shrugged and didn’t give the slightest shit. It was my problem. Just the sort of mindset I find more and more common.

It can be fixed but came with risk and a price. It wasn’t something I had the skill to do, so it ended up being better living with a working laptop plugged in, than one that might never start again. Through no fault of its own, the laptop has since irritated me.

The new laptop is one of the ASUS Republic of Gamer models. We will see how that goes.

Previously I’ve done small posts on each of the 2019 August through November EVE Economic reports. I looked at the split of NPC bounty payouts between Null, High and Low Sec, with commentary on the impact the Chaos era (particularly the introduction and removal of the Null Sec Blackout) had on in-game activity.

The December Economic Report is now out.

Unfortunately, it dropped the graph I used for details on the split of bounty payment across types of security space. While I could probably work it out from the data files, I won’t.

The total NPC Bounty Prizes paid out is still available. In December it was 43.9B ISK – an increase over November of 5.8%, but still below the 23-month average of 55.8B ISK.

The eve-offline.net statistics have also improved a little, the average daily online user counts for the: 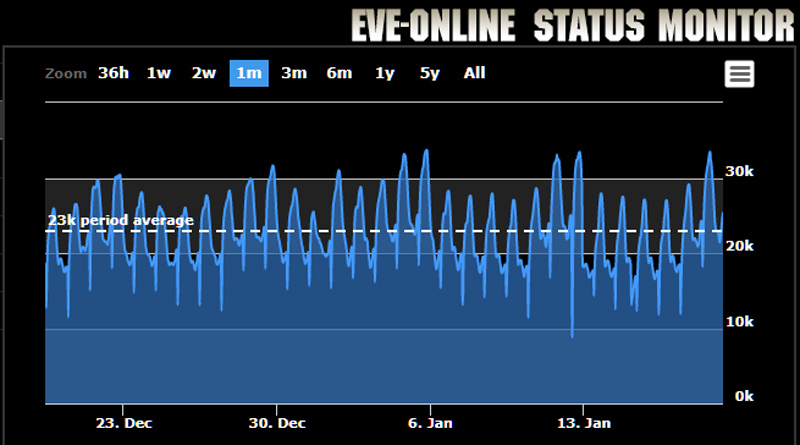 That is certainly better than the 20.2T ISK of bounties and 17,000 average user count back in September, when the Chaos influenced activity drop got to its lowest levels.

While there was a big bounce in October and smaller improvements in November and December, by these simple measurements, activity in game has still not managed to return to pre-chaos levels.

I hope the improvements continue, but at the moment CCP seems to have lost players they have not been able to entice to return or been able to replace.

Oddly, my home systems have been busier than usual. This has included the return of several Corporations I had not seen around for years. The income from my POCO has also increased notably. My quiet backwater seems to have bucked the trend.

Unless something changes drastically, I probably won’t do these particular posts again.