I undocked again – this time to go do some sightseeing.

This is the gate to Mamenkhanar in Domain – an Edencom Fortress system.

This is the gate to Mista in Domain – an Edencom Minor Victory system.

This is the gate to Gammel in The Bleak Lands – a Triglavian Minor Victory system.

This is the gate to Niarja in Domain – a Triglavian Final Liminality system.

Aside the irrelevant differences of the first three being Constellation Gates and the last a Standard Gate, the flags and status icons almost look the same.  They all show a Triglavian Invasion in progress and a Hi-Sec Security Level. If you jump into them, they all open a warning dialog box.  The only difference is the icon showing a High Level of Capsuleer Violence on the Niarja Gate, which could in theory also be shown on any of the other gates.

I assume this ambiguous visual is a deliberate choice by CCP – despite each of those systems providing quite a different risk profile to jump into.

(The following assumes neutral standings to both Edencom and the Triglavians.)

Jumping into an Edencom Fortress System is relatively safe. There are some different structures and NPC’s about, but generally you can travel through the system by gate without much thought.

Jumping into an Edencom Minor Victory system is mostly safe – but not entirely. There tends to be a Triglavian patrol moving around them. If they come across you, they will attack. Reports and killboard records show this includes on Gates. The risk seems low but is there.

Jumping into a Triglavian Minor Victory system is riskier. There will usually be Triglavian Werpost’s on the gate (Sentry Guns), and often NPC Gate Camps. There was an NPC camp on the Gammei – Ronne gate which I watched for a while.  I am not sure of their aggression mechanism. I believe they attack unless you have positive standings. While I watched, this camp killed and podded four players – two in Industrials, one in a Procurer, and one in a Pod. Two other players were left alone – one in a Heron Frigate who sat on the gate for several minutes before jumping, and one in a Gnosis who crashed back to the gate, but with no evidence they were shot at.  I am guessing those two pilots had positive standings.

Above is that NPC Gate Camp in Gammei – they do not do things by halves.

Jumping into a Triglavian Final Liminality system is the equivalent of jumping into a Null Sec system (but devoid of Capitals ships). I need to get into a much cheaper clone before I go sightseeing in one of those, so I am not sure how the Triglavian NPC’s act. I have read a few comments that theses systems tend to be abandoned if out of the way, but heavily camped by Triglavian aligned players if on a commonly travelled route. Niarja is extremely deadly.

While you are not given a visual warning at a gate, there are areas in game which highlight when a system is in a Final Liminality state.

If you look at the Solar System information, it shows two downwards facing red arrows against the security level.

If you look at the system in the Client Map it shows the same symbol. (Although who uses the client map?)

It also shows a Red upside-down Triangle on a Route, again with the red downward arrows displayed near the name if it is the next system you are travelling too.

It also shows the system listed in the Triglavian section of the Agency.

BUT – this might not be entirely accurate for researching far away systems. If I look at the Fortress systems, I am shown 32 results. 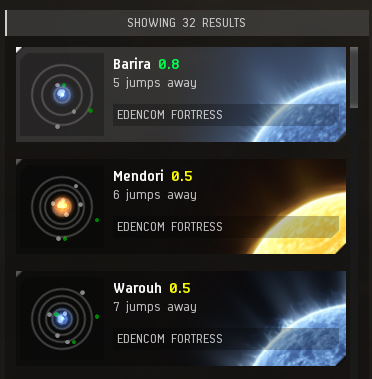 The Kybernaut site however lists 48 systems.

I presume there is a limit on the number shown in the Agency. I am guessing you just get shown the closest 32 systems.

Aside a lack of notification at a Gate, if you are cautious there are enough in-game methods to check if you are about to jump into a Final Liminality system.  It is a different story for the Minor Victor systems.

Kybernaut reports 26 Minor Triglavian and 58 Minor Edencom systems. These are not shown in the Agency. There is no mention in the Solar System Information Dialog. It uses the same icon in the Route as the Edencom Fortress systems.

(The above route passes through two Fortress systems and one Triglavian Minor Victory system.)

I think – unless you go outside of the EVE Client, you will not know you are jumping into one of those nasty Triglavian gate camps I noted above – until you are in the middle of it.

So – just roaming around exploring or travelling any sort of distance in Hi-Sec is notably more dangerous – and will likely get more so as the Invasions progress.  This has all sorts of ramifications to exploration / escalations / shopping purchases / trading / Epic Arc or Distribution Missions / any mission close to an invaded system and so on.  Any time you arrive at the gate of an invaded system, you will need to ensure you understand exactly what status it is in – which will likely require using a third party site.

I did read comments that the Triglavians will attack pilots with neutral or negative standings, and Edencom will only attack pilots with negative standings.  It was also remarked a number of times that it is possible to get a small standing for the Triglavians while still not being shot at by Edencom.  That would mean you no longer need to worry about NPC’s in any of those systems.  The risk is it is an inadvertent situation that CCP will “Fix” at a later date.  There is also the question of Wormholes.  Do the Triglavian’s camp Wormholes in invaded systems?  Lots more to try and understand.