Lines don’t look that great when drawn in sand

Blog Banter 37: The Line in the Sand

“EVE Online sits on the frontier of social gaming, providing an entertainment environment like no other. The vibrant society of interacting and conflicting communities, both within the EVE client and without, is the driving force behind EVE’s success. However, the anonymity of internet culture combined with a competitive gaming environment encourages in-game behaviour to spread beyond the confines of the sandbox. Where is the line?”

This is a complicated question – probably more suited to an Anthropologist’s PHD thesis than a blog post.

Simplistically, where the line sits comes down to accepted social, moral and legal norms. There is a field of science dedicated to this area, with legitimate means of identifying and categorising these norms.

The problem is that EVE – despite the marketing lingo, is not real.

The players connect remotely to a virtual world. They are not tied to a single geographical location. There is no consistent cultural history. They live under different legal and political systems. They have differing religions, languages, education, wealth and basic values. Even the population demographic is unusual, being mostly male and over 18 years of age.

In other words, instead of a single line in the sand, there are hundreds of lines, each as plausibly valid as the next.

When you play EVE I think you just have to accept this “flexible moral compass”, and give more leeway than you might personally be comfortable with.

While not an especially good example – it looks like our Corp recently had a hanger cleaned out by a thief. There was some disbelief and anger at this. Personally I just felt a little disappointed that the act representing less than 1% of the Corp, impacted the trust of the other 99%. The thief might have infiltrated the Corp just to steal. It might have been done by a hacked account. It might have been someone’s idea of revenge, or proving a point about security, or just plain simple greed. Whatever it was, I don’t feel the act crossed any line outside of the game.

Over the years however I have witnessed or heard multiple firsthand accounts of situations where I believe EVE related behaviour has crossed too far into the real world, even giving allowances for differing social norms. I have heard from people who have physically approached other players and threatened to assault them, or had that done to them. I have seen real life relationships systematically and deliberately undermined to further in game goals. I have seen people who clearly have emotional or psychological issues being purposefully provoked and upset with apparent intent on their wellbeing.

So I think there is a line, and the simplest way to define it (to my knowledge) is the classic Golden Rule.

It’s not perfect, but it works for most people and most situations. If you would not readily accept a behaviour being directed to you (or a loved one) in real life, then you would cross the line if you directed that same behaviour (in real life) to someone else.

(* The line image was taken from http://www.stanleywilliamhayter.com/anglais/fields_a.htm)

I haven’t done anything of substance in the game for 3 weeks, probably more.  I set aside 4 hours on Saturday morning just to play EVE.

I log in, undock, then the youngest starts complaining.  I re-dock, wondering why my wife isn’t running interference.  Turns out she is in the toilet.  The undock / re-dock cycle continues for 15 minutes, but it’s a waste of time and I am forced to go watch the kids.  I lose over an hour of my hoped for game time before my wife finally re-appears. I return to my study and undock.  Ten seconds later my wife walks in and says she is going to have a shower.  I dock up again before I get out of range of the station.  I ask her to be quick.  She glares at me.  I return to watching the kids.  An hour later my wife finally re-appears.

It takes a further 30 minutes of interruption before the family finally leaves the house for soccer and I finally have some peace.  In my shortened game time I manage to:

. Purchase the Cloning Facility Operation skill book and ingested it on my main
. Purchase a set of +3 implants for my alt
. Move the implants 25 jumps and leave in a station with a vanilla clone
. Move his current clone 27 jumps to where I want to leave it
. Jump Clone to the vanilla clone and load implants
. Move 30 jumps to pick up a spare Covert Ops
. Move 7 jumps to ingest Armor Resistance Phasing and Target Breaker Amplification skills
. Move some 30 jumps out to my second NPC 0.0 home system, by-passing a couple gate camps and making gate bookmarks along the way
. Log in another alt and scout a Corp mate into Low Sec

Now my Main and Alt’s clones are in sync.

The new PC has exceeded my expectations, and is flying along very nicely. Now I can finally run multiple accounts together again, all I have to do is log in, pick what I want to do, clone jump and go.  And I will do just that.. once I can find 2 spare minutes to rub together…

Out with the old, in with the new

It has been a hellishly busy couple of weeks, but tomorrow should be the last hurdle before things settle down again.

The setup of the new PC is progressing slowly but well, delayed a touch by the upgrading of my NAS and Printer / Scanner. (It’s been an expensive couple of weeks.) The old PC has been moved out to the dining room table, ready for an SSD and a fresh OS install. 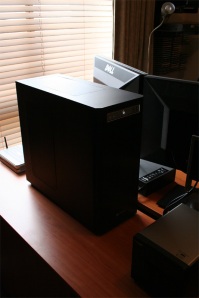 Most importantly, I am back to being able to run multiple clients at the same time.

I managed to actually play EVE at 5am yesterday – for the first time in almost a fortnight I undocked instead of just updating a skill queue. I can thank my wife for the unexpected game session. After we were woken by our youngest at 3am, I made the mistake of chatting to her for a couple minutes. After that she spent the next two hours chatting back. In the end I had to abandon hope of getting more than 3 hours sleep, and headed downstairs.

I haven’t fixed up my UI after the fresh client install. Reloading the overview is easy enough, but having to reposition and tweak all the other elements to my taste for 5 active characters is a laborious task. I just did my PI and Trade runs, and settled on updating the overview for my two Empire Alts as I moved them about.

DDO has recently introduced a feature where you can save an overview and share it amongst your various characters – but it includes window placement and a couple other bits and bobs. It is somewhat cumbersome, but that extra information saves a great deal of time. I suspect I wouldn’t be the only person happy if CCP buffed the amount of information handled by the current overview export.

I am hoping to get some more substantial EVE sessions in over the coming week.

Picked up the new PC yesterday, and then spent the next 24 hours trying to work out what was wrong with it. (It wouldn’t boot unless the displayport connection was removed and replaced each time. Found forum complaints about both the motherboard manufacturer and the specific 27” DELL screens I use having related issues. Resolved by just sticking with dual DVI connections, but took a while to work all of that out.)   The base specs of the new system:

It boots before my old system gets past the BIOS displays, is extremely quiet, and is having no issues with multiple EVE clients. Likely to take a week or so to set up all the applications and get the EVE client back to how I want it, so not likely to be doing much in game until that is all done.

Waiting on an ETA

I downscaled some of the graphic settings in line with what Helena khan suggested. It managed to lower the memory usage by around 150MB when running a single client, but I was still hit with stuttering freezes when running two.

One way or the other the issue will get resolved. I ordered a new PC last night. I checked the status of the build tonight and they are waiting on an ETA for the CPU and primary SSD. If those parts don’t take too long, I am hoping it will be ready in the first half of next week.

I watched some of the Alliance Tournament matches over the weekend – somewhat against my better judgment after the farcical ending to the last one. I knew a couple of the pilots so I made the point of watching their matches. Neither did so well. The commentary annoyed me after a while – one of them was too hostile towards the other which quickly got tiresome.

I’ve been watching an interesting shift in the dynamic of the Corporation I am a member of. While it prides itself on the RL > EVE philosophy, there is a reality about any Corporation who is in 0.0 (even the NPC version of it). Your alliance and allies have an expectation that you will have a level of participation that is in proportion to your member count.

This is actually the most active Corp I have been involved in – there are frequent mining ops, group build projects, PVE fleets, a permanent wormhole presence with regular group ops, and relatively frequent PVP ops. The problem though is most of this activity isn’t visible outside of the Corp.

Perceptions are important, so there seems to have been a focus on ensuring everyone is involved in something, and trying to move some of the Alt army out to reduce the distorted member count. It’s a difficult balancing act for the Corp leadership.

COPYRIGHT NOTICE EVE Online and the EVE logo are the registered trademarks of CCP hf. All rights are reserved worldwide. All other trademarks are the property of their respective owners. EVE Online, the EVE logo, EVE and all associated logos and designs are the intellectual property of CCP hf. All artwork, screenshots, characters, vehicles, storylines, world facts or other recognizable features of the intellectual property relating to these trademarks are likewise the intellectual property of CCP hf. CCP hf. has granted permission to evehermit.com to use EVE Online and all associated logos and designs for promotional and information purposes on its website but does not endorse, and is not in any way affiliated with, evehermit.com. CCP is in no way responsible for the content on or functioning of this website, nor can it be liable for any damage arising from the use of this website.
Follow Evehermit on WordPress.com