There are 5 days’ worth of Halloween stuff to collect – including some skill points, fireworks, and some skins. It is active now.

One of the skins is for an Avatar Titan. I wonder at the thought process behind that. Let’s give every Omega Pilot a skin for a Titan that only a tiny fraction of them will ever have. CCP seems to view Titian skills as so rare even their EVE Portal App has reported my training in them as unknown skills.

Oh well, gift horse, mouth, and all that stuff.

The “Shocking” PVP event mentioned starts shortly – from 11:00 UTC on the 29th of October through to 11:00 on the 5th of November. Called trick or treat, 100% of the loot will drop from PVP kills. If you die, all modules and cargo drop. That removes the gamble from suicide ganking, so expect a lot more of it for a week.

You probably need to halve the value of any ship fit or cargo you are comfortable flying around in during Trick or Treat, or just don’t undock.

I had a moment of clarity regards EVE the other evening. I was talking to an x-player, who tends to come and go from the game. They mostly play solo, and like mining in High Sec and accomplishing industry type goals. They had heard that the game had become a lot less friendly to his style of play and asked if I would recommend it for him right now. I wouldn’t recommend it was my reply.

Another bonus skill point week has started – between 200,000 and 650,000 free skill points per account for just logging in each day for a week.

CCP indicate it is part of the lead up to Halloween celebrations, but it is odd to see it rushed back so quickly.

Unlike the Skills for Kills event ( https://www.eveonline.com/article/pyoxkd/skilling-spree-returns ) – which I haven’t bothered to collected this time even once on any of my accounts, I was enticed to log in for a couple of minutes to collect this bonus.  But that was all it was – a couple minutes to redeem then I logged off again.

A more positive reason for being online is that CPP have now made a bunch of ships warp quicker, and autopilot to also be a bit more efficient.

Wilhelm Arcturus goes into a bit more depth, but improvements of a third to a half for many medium to large ship hulls have been noted.

I’m not sure the Nestor, which has always been a nice Battleship to warp around in, was buffed to keep it in quite as a unique place.

When Skill Points lose their power 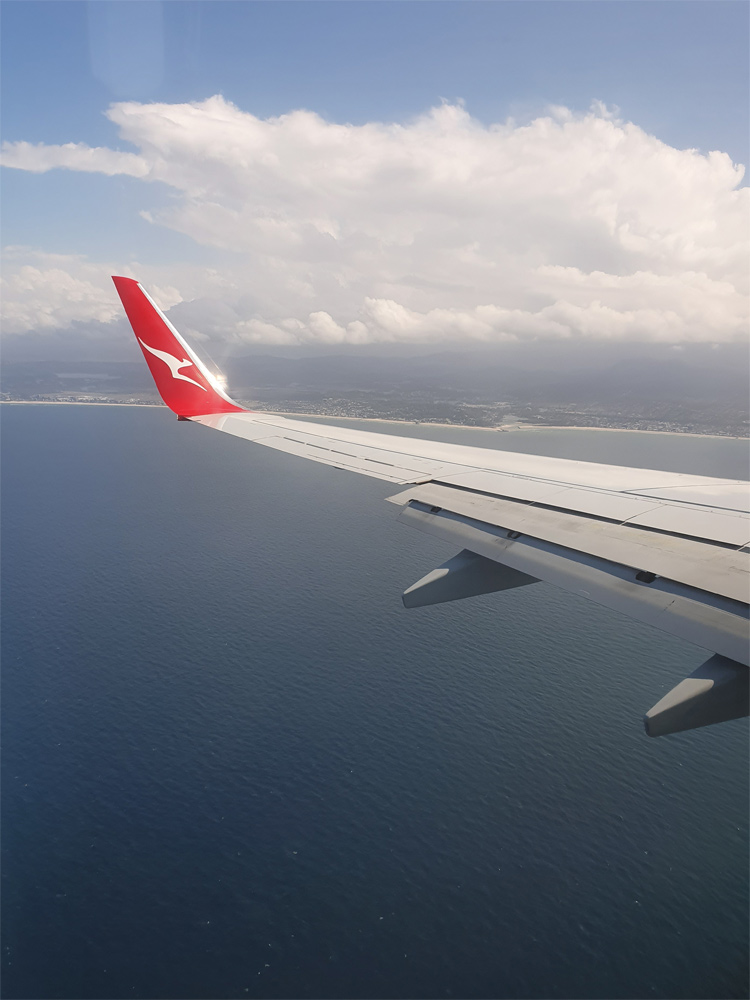 The kids have had their school holidays and we undertook the at least once in a lifetime obligatory pilgrimage from the southern states of Australia to the Queensland Gold Coast, to visit the Theme parks.

In the lead up I was too busy to log into EVE much, then I decided to leave my gaming laptop at home while we were away. My in-space structures ended up being left to their own devices for a couple of weeks.

We have been back for almost a week, and I am still not inclined to log in. Not even the oddly fast-tracked resurrection of the Skills for Kills event has had an allure.

I did notice the EVE September Economic Report is out.

I wanted to go back and look at the graphs I made last month. To make interpreting it trickier, the Null Sec Local blackout finished (mid-month on the 16th) and the new Cyno changes were introduced (earlier in the month on the 10th).

I added the September data to my spreadsheets. I am using the bounty payout amounts as a very rough measure of undocked activity across Null, High and Low Sec within EVE.

In September the bounty amounts collected were: 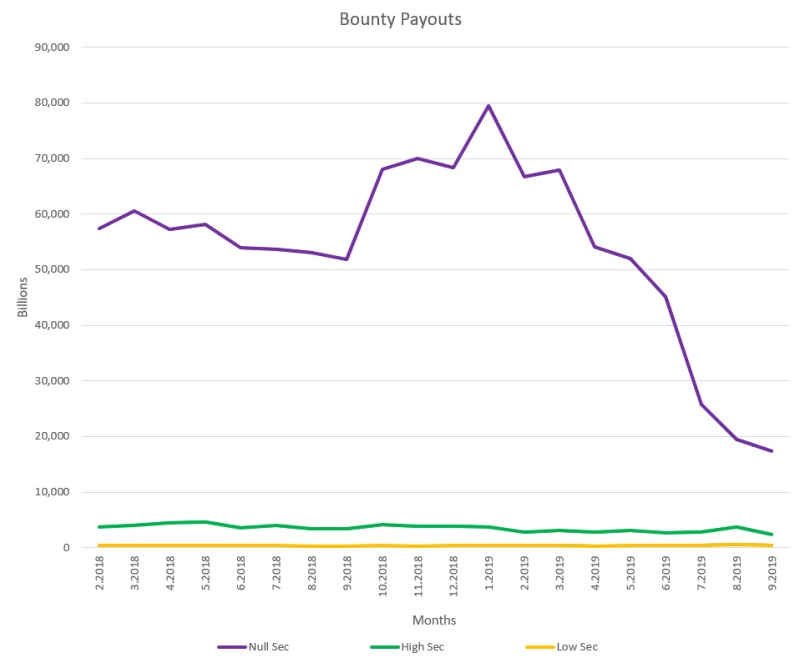 There wasn’t an immediately obvious rebound from returning Local to Null Sec as I was expected – although it might have arrested what could have been an even larger fall. The highest bounty earning ships in Null Sec are Supers – which now can no longer fit Cyno’s. Maybe this stifled bounty earnings while the Null Sec Alliances came up with new tactics and rules.

If I go back to eve-offline.net again, the average daily online user counts for the: 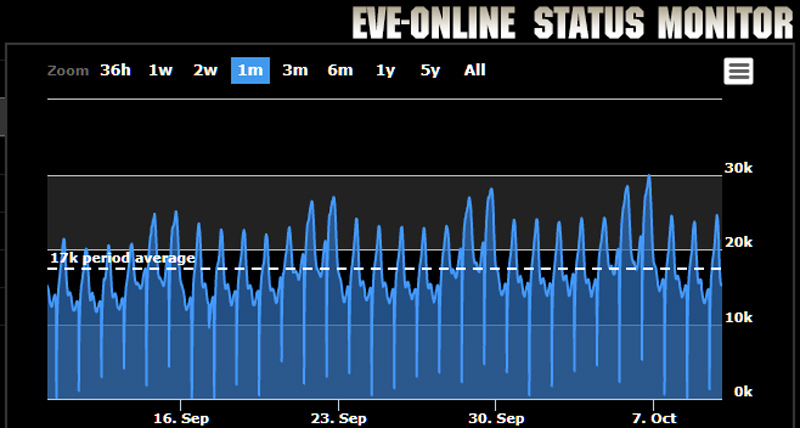 This continues the downwards trend, but it does appear as if there is an increase in online pilots over the last few weeks, particularly on weekends.

Nothing entirely definitive, so we wait again for what October might show. I am guessing next month will see a bottoming out of the downward trends, and what should probably be an uptick. Of course that depends on the next version of chaos CCP try injecting into the game.