The EVE Toy box has been rather empty for a while, so I spent almost 3B ISK to add some stuff to it.

I have no idea if any of these will become permanent members of my Space Ships hanger.

While I can fly them all, I had to add to my training queue to cover off their T2 Weapon variants.

It is nice to have some skills training that you are actually waiting on.  My most recent trained skill was Rank V in Heavy Interdiction Cruisers.  I can’t remember when I last flew one of those hulls – and I don’t expect to fly one any time soon either.  Before that was Medium Autocannon Specialization V and Small Blaster Specialization V – two more skills I am not likely to use for a long time.  I am now just a few days off finishing Interdictors V – another hull type I don’t see a use for.  As I have rank V in pretty much all the skills I actually use, my Skill queue was filled almost mindlessly.

I am not sure how the ammo works.  I might have grabbed far too much or far too little.  I’ll work it out.  The pricing of the stuff was a bit mind boggling and all over the shop.  The volumes sold are very low.  Maybe 20 Frigates, 30 Cruisers and 30 Battleships a day from Jita.  As the skills finish training I will just play around with each Hull and see if I can get a fitting I find a use for.  At least it should get me undocked and into some content for a little while.

Burning through the Reserves

The following screen grab is of my Corporation Master Wallet for the last 3 months. 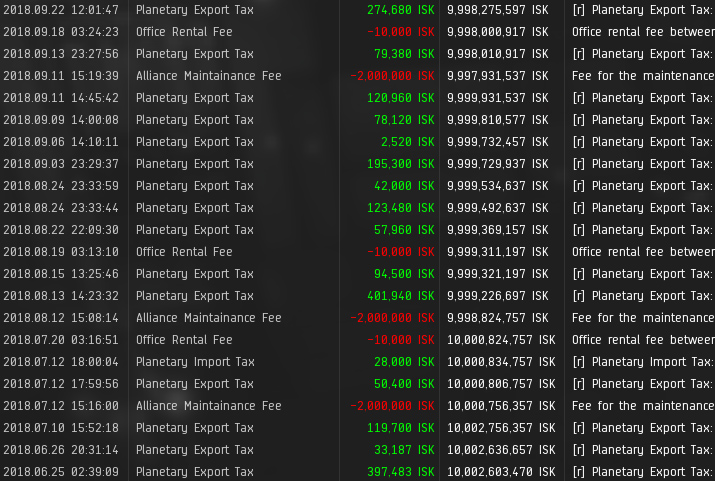 Each month the outgoings are 2M ISK for the Alliance Maintenance Fee (for one Corporation) and 10K ISK for Office Rental.

The Corporation has a 5% tax – but because I haven’t been doing anything in game to earn ISK, there is no contribution from me.

The Corporation also has four Customs Offices, with low tax rates set (2% for Neutrals).  Only two pilots have used any of these offices over the last 3 months, and even then rarely.

The vague idea was that between the above Tax input that the Corporation and Alliance would remain roughly ISK neutral.  That was working out initially, but not so now.

No need to panic just yet.

Of actual note – isn’t it odd that for Alliance Maintenance Fees, the Journal Entry Type is incorrectly spelt as “Maintainance”, while the Description is spelt correctly as “Maintenance”.

CCP announced some balance changes in the October release.

It was suggested these are outcomes of the CSM Summit.  Given some of the items, the cynical side of me wonders if this is a direct form of appeasement towards some of the louder player rabble.

First – ECM. If someone gets an ECM jam on you, you will still be able to lock / fire upon that pilot. It will only stop you locking other pilots. If you already had a lock on the ECM ship, the lock won’t drop. To compensate, there will be some slight buffs to ECM ship fittings and tank, and in the longer term, ECM strength.

That should please the ECM haters.

While there is an interesting elegance to the idea, it takes the ECM Ship option away from solo players (as it will seemingly be pointless). It relegates these hulls to a couple niche fleet roles. It will still work ok as a possible counter to Logistic Ships. It can still be used in small gang PVP – where a Tanky ECM ship can take the fire of a single or small number of targets, allowing the other ships in the gang to be configured as glass canon DPS. It might still work for a solo player dual boxing a hauler with an ECM guard, although it means the ECM ship will more likely die if you must use it.

Unless the extra tank and fitting options bring up new uses of the ECM hulls, I doubt I would have a need for owning one any more.

The use of ECM drones isn’t nerfed as hard. If I read right, the jammed pilot will be able to lock the ECM drone, but it didn’t indicate they could lock the pilot using the drones. I will have to confirm that.

Second – the Interceptor nullification is being looked at. Another thing I’ve noticed many players hating on.

CCP have indicated the original change increased the number of people roaming, so they did not want to remove the option. Instead they will remove it from the Combat Interceptors (Claw, Crusader, Raptor, Taranis) but leave it on the fleet Interceptors (Stiletto, Malediction, Crow, Ares). I use a Malediction as a out of Hi-Sec scout / shuttle, so it will still be of use.

Third – there will be changes to Heavy Interdictors, and possible small changes to the FAX, with future Capital balancing. None of that impacts me.

Fourth – there will be a balance change to the Triglavian Damavik (Frigate), moving one low slot to a mid to hopefully increase the number of people who use the hull.  I don’t use those ships as yet, but I might down the track.

Limited Fundraiser for another Loss at CCP

As part of a fundraising initiative for the family of CCP Mankiller (who passed away in July from Cancer), CCP have released 8 skins.  Once $20K USD of these have been sold (all to be donated), they will be forever removed from sale.  I expect that means they won’t be around for long at all.

They are at a nicely priced 60 PLEX each.  I grabbed a couple for my own use.

The “group of three big financial investors” who own CCP are selling her to a Korean MMO developer, Pearl Abyss.

The release talks a lot about us – you / your is mentioned 11 times, community is mentioned 5 times.  Excited is thrown in twice.

You can see some of the initial feedback on CCP’s Facebook page and in this official thread here:

It seems to be an even mix of Pearl Abyss being horrible for how it approaches pay to win, EVE is dying, or what an exciting opportunity.

I don’t have a view on if this is a good or bad thing.  I did raise my eye at the comment that CCP will continue as a “wholly owned independent subsidiary”.  That didn’t make much sense.  The only way CCP would be left entirely independent was if it was a safe and secure cash cow that gave a great rate of return on investment.  If that was the case, it wouldn’t have been sold.  In every company I have worked for that has been purchased “wholly”, the new owners have always moved to extract their profits from the purchase.  The only question is how long it takes, and if their influence is for better or worse.

Overall I am of the mind that change is probably a good thing and that EVE needed it.  Whether it turns out good for EVE or not, I am not so sure.  Whatever, it should take a while before we see real evidence of what will happen within the game.